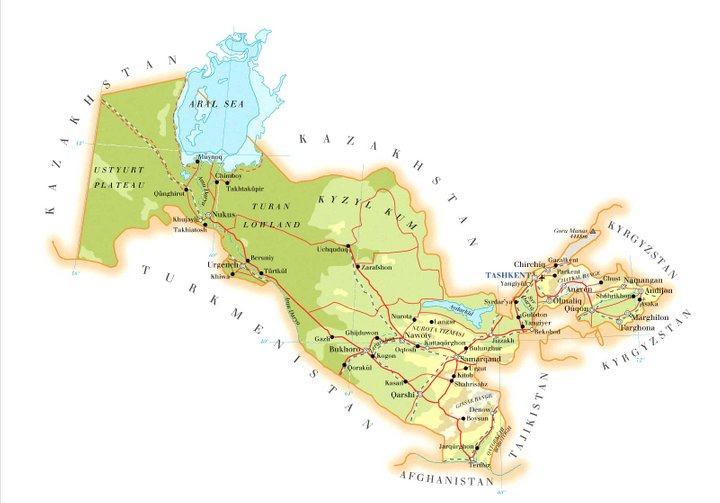 Arrival to Tashkent at 02:45. Transfer to the hotel, hotel accommodation. After breakfast sightseeing tour:

Amir Temur (Tamerlane) square - The square represents a small park in the center of the city.

Independence Square - On the largest square of the Republic of Uzbekistan sit the administrative headquarters of the Cabinet of Ministers and Senate.

Monument of Courage - The monument was built in 1976 to the 10-th anniversary of the terrible earthquake that destroyed almost half of the city.

Lunch at the national restaurant.

Chorsu bazaar - the most popular and famous national bazaar in Tashkent. Dinner at the national restaurant. Overnight in Tashkent.

After early breakfast transfer to the airport for morning flight to Urgench,

Muhammad Amin-Khan Madrasah - The biggest medieval madrasah in Khiva, the Madrasah of Muhammad Amin-khan (1845-1855) is located opposite to Kunya-Ark at the gates of Ata-darvaza. Its area is 78x60 m. The Madrasah has 125 hudjras and could receive up to 260 pupils. The portal is crowned with five domes and flanked by corner towers.

Kunya-Ark fortress - Kunya-Ark ("O ld fortress") is the inner citadel of Ichan-Qala. It was founded in the 17th century by Muhammad-Erenk Khan (1687-1688). Kunya-Ark had formed a "city inside a city" separated by a high wall, by the end of the 18th century.

Lunch at the national restaurant.

Continue of the city tour:

Mausoleum of Makhmud Pakhlavan - The necropolis of Pahlavan-Makhmud is the religious center of Ichan-Qala. It formed around the tomb of Khiva's patron Pahlavan-Makhmud (1247-1326). He was a poet, philosopher and wrestler.

Friday Mosque and Minaret - The cathedral mosque of Khiva, otherwise known as Djuma-Mosque, is located in Ichan-Qala on the road leading from the gates of Palvan-darva-za to Ata-darvaza. It is a typically archaic mosque with a flat ceiling on columns which has no analogue in Central Asia.

Ak-Mosque - The Ak-Mosque ("White Mosque") was built at Anush-khan (1663-1687) in the middle of the 17th century.This is a small quarter mosque next to the gates of Palvan-darvaza. The winter building with prayer hall has a white conical dome.  Dinner at the Former Khan’s palace. Overnight in Khiva.

After breakfast we will drive to the Recreation Area in the close vicinity of Khiva (6,4km south-east of Khiva town). It is located in the Karakum Desert along the shores of Lake Ehonravat.

Entertainment program: camel riding and horse riding (by extra payment), and nature walks along the lake or in the desert. Lunch. Drive to Khiva.

Breakfast at the hotel. Transfer to railway station, departure to Samarkand by high-speed train “Afrosiab”, departure at 08:00, arrival at 10:10.

Bibi-Khanym Mosque - The cathedral mosque was given one of the greatest portals of that era. Its arch was flanked with powerful pylons, with minarets up to 50m in height.

Lunch at the national house.

Continue of the city tour:

Gur-Emir Mausoleum (tomb of Amir Temur) - Gur-Emir is Persian for "Tomb of the King". This architectural complex with its azure dome contains the tombs of Tamerlane. The earliest part of the complex was built at the end of the 14th century by the orders of Muhammad Sultan.

Mausoleum of St. Daniel - On the shore of Siab, a small tributary of Zerafshan River, there is a sacred place, which keeps the relics of Daniel, the Old Testament Biblical Prophet. Another version says that there are the relics of Daniyol (or Danier), an associate of the Arab preacher Kussama ibn Abbas. But all versions agree that Danier is the Saint and pilgrims from all the three world religions come here to worship him.

Dinner at the national restaurant.  Overnight in Samarkand.

After early breakfast transfer to the yurt camp in Kyzyl Kum desert. On the way stop on Nurata pass to see petroglyphs. Arrive at the yurt camp. Lunch. Camel riding. Visit Aydarkul lake. Free time.  You will enjoy a beautiful night sky full of stars near the campfire while Akin sings folk songs after the dinner. Overnight in the yurt.

After breakfast free time on Aydarkul lake.  Lunch at the yurt camp.

Dinner at the national restaurant.

After breakfast drive to the village near Samarkand has the “Meros” paper mill. You will see all process of making the silk paper.

Observatory of Ulugbeg - The largest observatory in Central Asia was built in the 1420's by Ulugbeg. Here, for three decades, scholars, including the outstanding astronomers Qazi-Zadeh Rumi, Djemsnid Giyas ad-Din Kashi and Ali Kushchi, performed measurements of celestial movements.

Lunch at the national house.

Visit Shakhi Zinda necropolis - unique architectural monuments. The genesis of the Shahi-Zinda necropolis on the slope of Afrasiab hill is connected with Kusam ibn Abbas, the cousin of the Prophet Muhammad. We know that he took part in the first Arab campaigns to Maverannahr. According to legend, Kusam was mortally wounded on the walls of Samarkand and escaped underground, where he continues to live, hence the name of the necropolis, Shahi-Zinda - "living king".

Transfer to railway station, departure to Tashkent by high-speed train “Afrosiab”, departure at 17:00, arrival at 19:10.

Dinner at the national restaurant. Overnight in Tashkent.

After breakfast transfer to railway station, departure to Kokand at 08:05 a.m., arrival at 12:07.  Lunch at the national café. Sightseeing tour in Kokand:

Khudoyar-Khan Palace - Pearl of Kokand is the palace of the last ruler of Kokand Khanate's Khudoyar Khan. The magnificent palace complex, built in 1871, is a staggering grandeur.

Kamol-Kazy Madrassah - One of the Kokand attractions is the Kamol-Kazy madrasah, built in 1830-1832, in classical traditions of Kokand architecture Jami Mosque.

Continue driving to Fergana city (80 km/ 1.5 hrs). On the way visit ceramics workshops in Rishtan. Check in to the hotel. Dinner at the hotel.  Overnight in Fergana.

Breakfast at the hotel.

Drive to Margilan visit Yodgorlik Silk factory where you can see the production process of silk with traditional Ikat patterns. Lunch. Transfer to Tashkent through the mountain pass Kamchik by cars (250 km/4hrs).  Dinner at the national restaurant. Overnight in Tashkent.

After breakfast we will drive to Beldersay Mountains (80 km, 2hrs). You will be driving the road lying in picturesque surroundings full of local villages, gardens, and streams. If the cableway is functioning take 3 km long ride in Beldersay gorge to Kumbel peak. Have a walk in mountain area. Continue to the shore of Charvak reservoir, surrounded by green mountain flanks. Charvak Lake is a favorite place of locals and foreigners to enjoy summer days outside the city.

Breakfast at the hotel. Free time.

Drive down serpentine road to Chinara’s restaurant to have lunch under the shade of four giant plane trees. On the territory of restaurant, there are unique petroglyphs. Return to Tashkent after lunch. Hotel accommodation.

Dinner at the national restaurant with folklore show. Overnight in Tashkent.

Accommodation at the hotels incl. breakfast:

•5 nights + early check-in in first day  in Tashkent at the “Uzbekistan” 3* hotel or similar;

•1 night in Khiva at the hotel “Shakhjakhan” 3* or similar;

•1 night in Nurata at the yurt camp “Qyzylkum Safari”;

•2 nights in Samarkand at the hotel “City Samarkand”3* or similar;

•1 night in Charvak at the hotel “Avenue Park” 4* or similar.

Transportation as per program (minibus Toyota Coaster or similar);

Full board according the program;

Entrance fees for the monuments according the program;

- Photo and Video fees in the monuments;